The DSM-5 has identified 3 symptoms for ED1:

The pathophysiology of ED may be vasculogenic, neurogenic, anatomical, hormonal, drug-induced and/or psychogenic.

ED as a Biomarker of NCD

Erection as the most efficient marker of the phenotypic condition of biological systems. 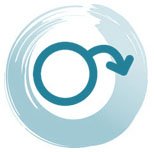 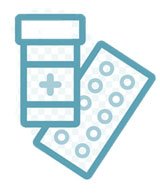 In the “Multinational Men’s Attitudes to Life Events: and Sexuality (MALES)” study:

Prevalance of comorbidities is higher in men with ED1-4

ED, appearing in otherwise healthy men, may be an indicator of serious systemic conditions that have not yet manifested in other ways.5

The relationship between ED and CVD in various multivariate models.4

*Hazard ratio compared with men with no ED.
†Wald Chi-square test.
‡The multivariate model includes BMI (continuous) and the variables that are part of the Framingham risk score: Age, HDL cholesterol and TC (all as continuous variables), as well as current smoking (yes/no), and hypertension categorised according to BP readings by JNC-V definition (optimal, normal, high normal, Stages I-IV).4 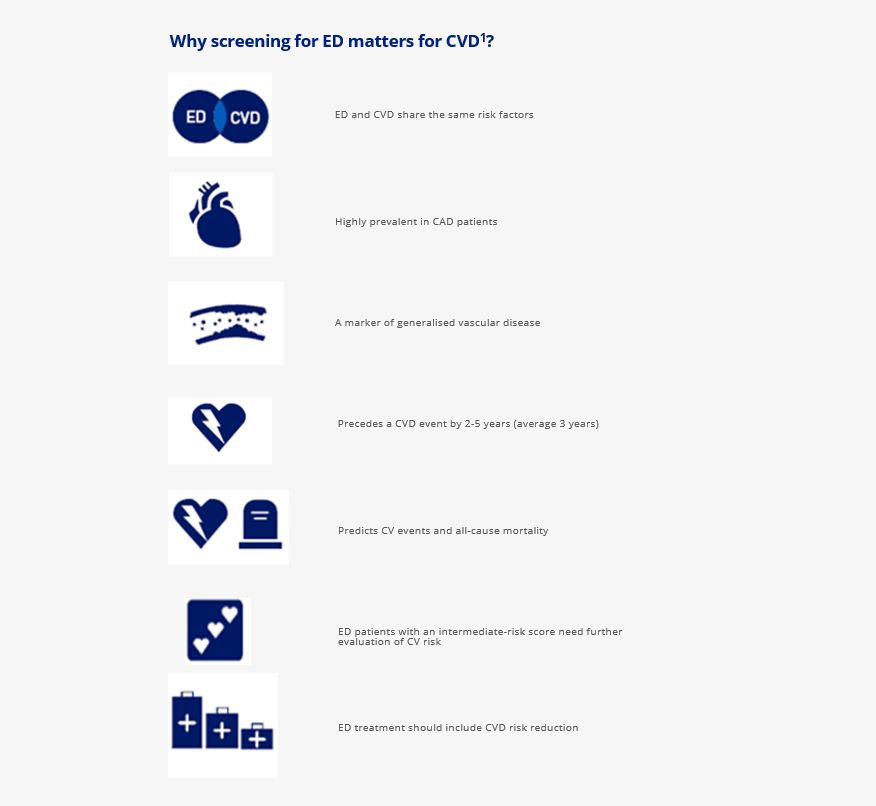 A systematic literature review was conducted to analyse the relationship between ED and CVD, including pathological links between these conditions. A systematic literature review searching medline, embase and web of science databases was performed. The search strategy included the terms erectile dysfunction, cardiovascular disease, coronary artery disease, risk factors, pathophysiology, atherosclerosis, low androgen levels, inflammation, screening and phosphodiesterase type 5 inhibitors alone or in combination. ED and CVD should be regarded as 2 different manifestations of the same systemic disorder. ED usually precedes CVD onset, and it might be considered an early marker of symptomatic CVD.1

A systematic review discusses the role of cardiologists and urologists in the characterisation of risk and management of CVD in the setting of ED, as well as contrasting the current evaluation of CVD and ED from the standpoint of published consensus statements.2

A pathophysiologic mechanism was proposed to explain the link between ED and CAD called the artery size hypothesis. Given the systemic nature of atherosclerosis, all major vascular beds should be affected to the same extent. However, symptoms rarely become evident at the same time. This difference in rate of occurrence of different symptoms is proposed to be caused by the different size of the arteries supplying different vascular beds that allow a larger vessel to better tolerate the same amount of plaque compared with a smaller one.3

A prospective, population-based study of 1709 men (of 3258 eligible) aged 40-70 years was conducted. ED was measured by self-report. Subjects were followed for CVD for an average follow-up of 11.7 years. The association between ED and CVD was examined using the Cox proportional hazards regression model. The discriminatory capability of ED was examined using c-statistics. The reclassification of CVD risk associated with ED was assessed using a method that quantifies net reclassification improvement.4

Association between diabetes and ED

Pathogenesis of ED in diabetes

i.Macrovascular disease in diabetes corresponds to the atherosclerotic damage in the blood vessels, which limits blood flow to the penis.4

i.Microvascular disease determines ischaemic damage in the distal circulation and autonomic and peripheral neuropathy. Both somatic and autonomic neuropathies may contribute to diabetes-induced ED due to the impairment of sensory impulses from the penis to the reflexogenic erectile centre, and reduced or absent parasympathetic activity necessary for relaxation of the smooth muscle of the corpus cavernosum.4

i.Endothelial dysfunction in diabetes is manifested as the decreased bioavailability of NO, resulting in insufficient relaxation of the vascular smooth muscle of the corpora cavernosa.4

Insulin resistance and visceral adiposity, which are both distinctive clinical traits of type 2 diabetes, are associated with a proinflammatory state that results in the decreased availability and activity of NO, leading to ED in  overweight and obese diabetic men.4

To examine the association between ED and vascular disorders in the context of current knowledge regarding PDE-5 inhibitors, an electronic search was performed of articles published from January 2002 through April 2008 using the PubMed, EMBASE and MEDLINE databases. Although preference was given to randomised, blinded, controlled clinical trials, data from retrospective studies were also reviewed when appropriate.1

A prospective study was conducted to evaluate 7 classic CHD risk factors (age, smoking, hypertension, diabetes, hypercholesterolaemia, hypertriglyceridemia and obesity) in 1810 men aged between 30 and 69 years from 1972 to 1974. In 1998, after an average follow-up of 25 years, surviving male participants were asked to complete the IIEF-5, which allows stratification of ED into 5 groups. Improving CHD risk factors in mid-life may decrease the risk of ED as well as CHD. ED should be included as an outcome in clinical trials of lipid-lowering agents and lifestyle modifications.3

Relationship between hypertension and ED1

Relationship between hypertension and ED

Depending on the class of the antihypertensive drug and its effect over endothelium mediators, the impact on ED could be positive or negative. PDE-5 inhibitors, ED’s first-line therapy, present a mechanism of action based on NO bioavailability. Continuous use of PDE-5 inhibitors proved to reverse endothelial dysfunction with positive impact on sexual function and even on BP control.1 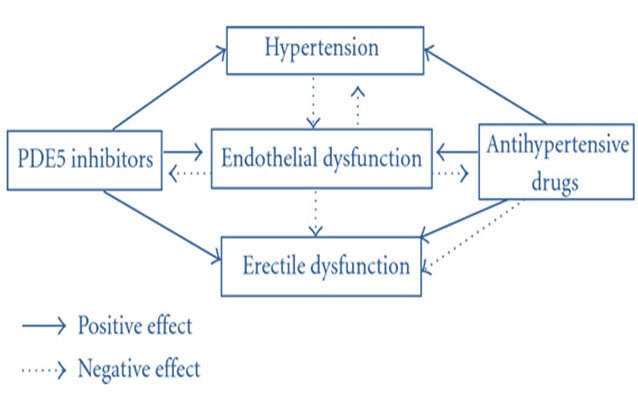 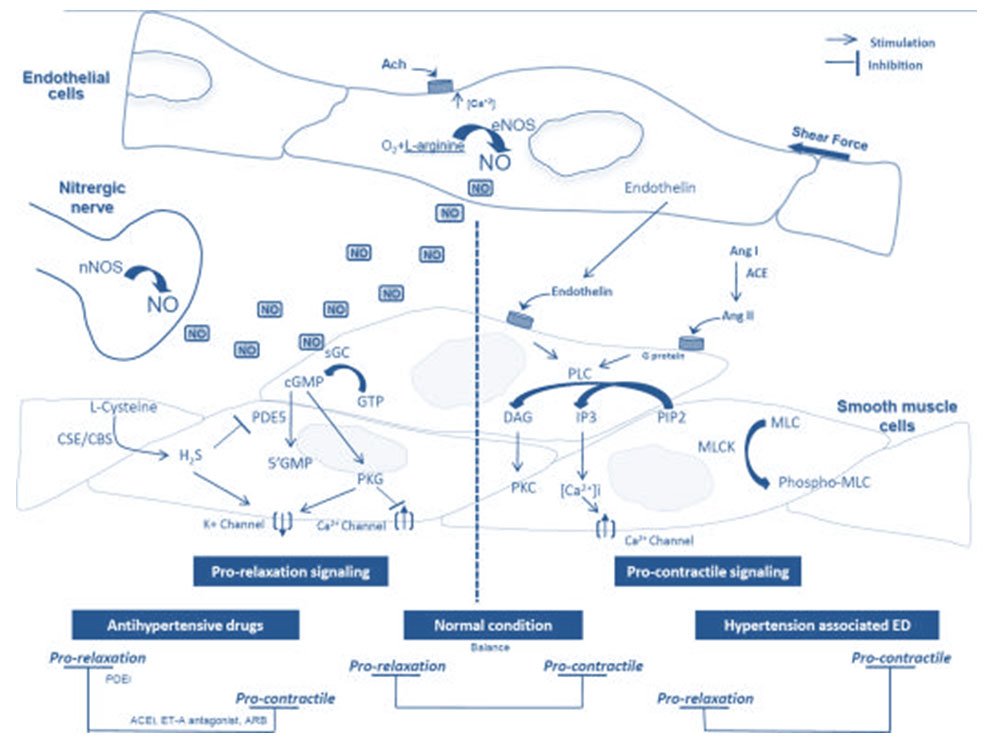 The MALES Phase 1 study looked at the prevalence of ED and related health concerns in the general population and included 27,839 men aged 20 to 75 years who were interviewed using a standardised questionnaire. The MALES study confirms the high prevalence rates of ED and its association with co-morbid medical conditions, such as diabetes and depression, reported in other large-scale, epidemiological studies. Despite the advent of oral PDE inhibitors, only 58% of ED sufferers consult a physician about their problem, and only 16% of men with self-reported ED maintain their use of oral therapy.2

In total, 7689 patients (mean ± SD age 58.9 ± 9.2 years), including 6719 (87%) in a stable sexual relationship were surveyed. The abbreviated 5-item version of the IIEF-5 was used to determine the presence of ED. A patient questionnaire was used to assess attitudes about ED.3

The interplay between hypertension and ED, exploring newest insights regarding hypertension-associated ED, as well as the effect of antihypertensive drugs in ED patients has been reviewed.4

Obese men are at higher risk of developing ED1

The prevalence of overweight or obese men reporting symptoms of ED may be as high as 79%.2

How are obesity and ED related?

Randomised, single-blind trial of 110 obese men (BMI ≥30) aged 35 to 55 years, without diabetes, hypertension or hyperlipidaemia, who had ED that was determined by having a score of 21 or less on IIEF. The study was conducted from October 2000 to October 2003 at a university hospital in Italy. The objective of the study was to determine the effect of weight loss and increased physical activity on erectile and endothelial functions in obese men. Lifestyle changes are associated with improvement in sexual function in about one-third of obese men with ED at baseline.2

Men with ED may experience anxiety, depression, reduced self-esteem and a reduced quality of life.3

Prevalence of depression or anxiety in men with and without ED4 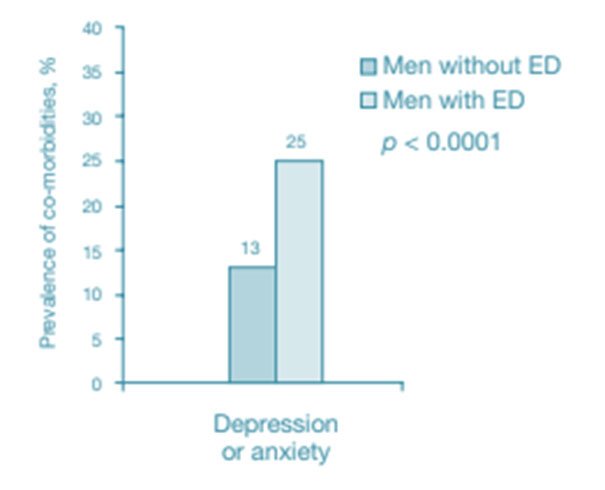 The MALES Phase 1 study looked at the prevalence of ED and related health concerns in the general population and included 27,839 men aged 20 to 75 years who were interviewed using a standardised questionnaire. The MALES study confirms the high prevalence rates of ED and its association with co-morbid medical conditions, such as diabetes and depression, reported in other large-scale, epidemiological studies. Despite the advent of oral PDE inhibitors, only 58% of ED sufferers consult a physician about their problem, and only 16% of men with self-reported ED maintain their use of oral therapy.4

Cigarette smoking may be a cause of ED.5

The relation between smoking and ED

New real-world results from a database of 48 million men in the US showed that: 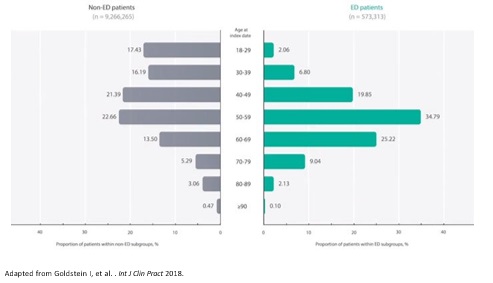 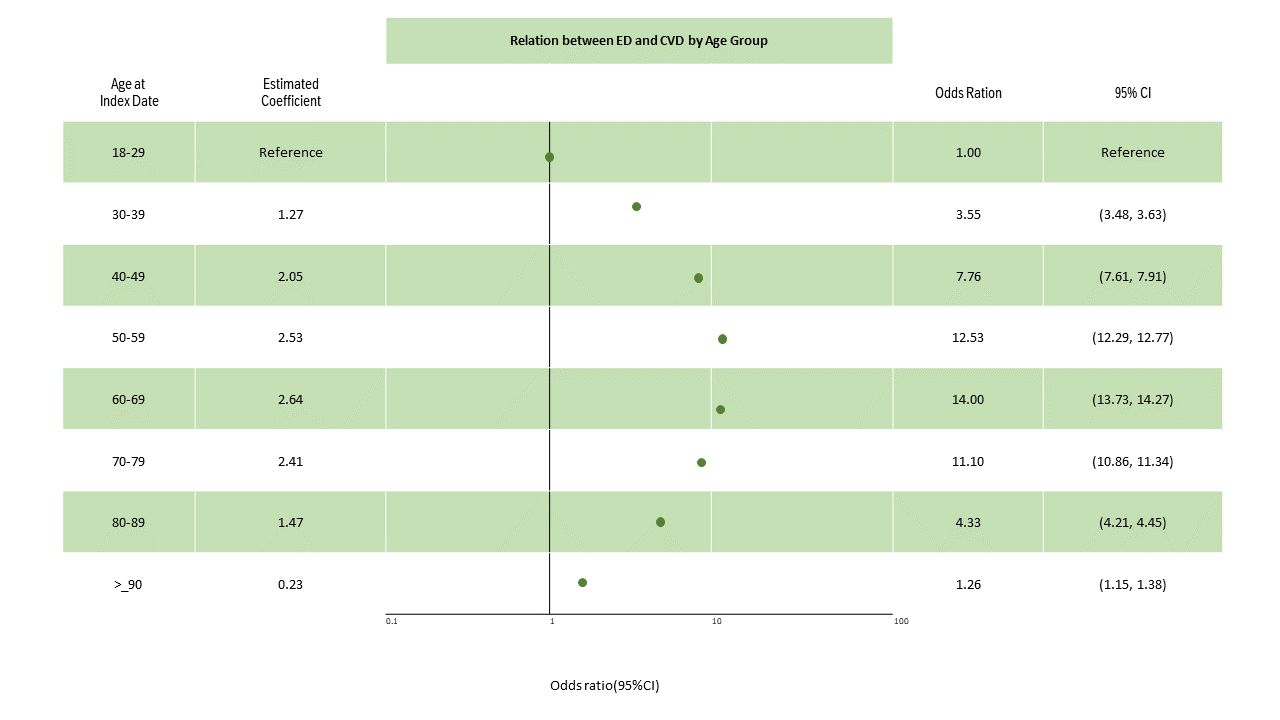 Younger men with ED should be evaluated for comorbidities even men as younger as 30 years old.1

This was a cross-sectional, non-interventional study in men aged ≥18 years using data from the Truven Health MarketScan® and Medicare Supplemental Research Databases from January 2010 to December 2015, with an observational period of January 2011 to December 2014 to allow for 12 months pre- and post-index. Comorbidity rate was compared between ED and non-ED groups by age using the χ2 (bivariate) test. Comorbidity relationship to ED after controlling for categorical variables was assessed using logistic regression analysis.1 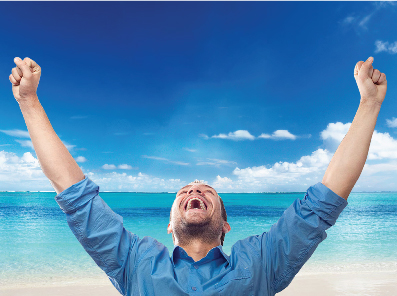 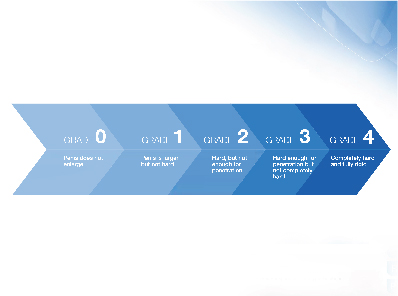 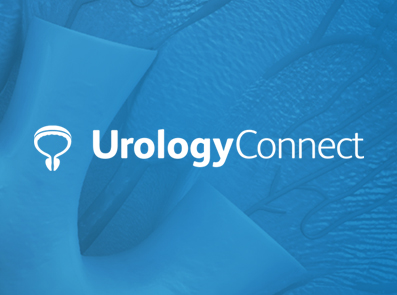